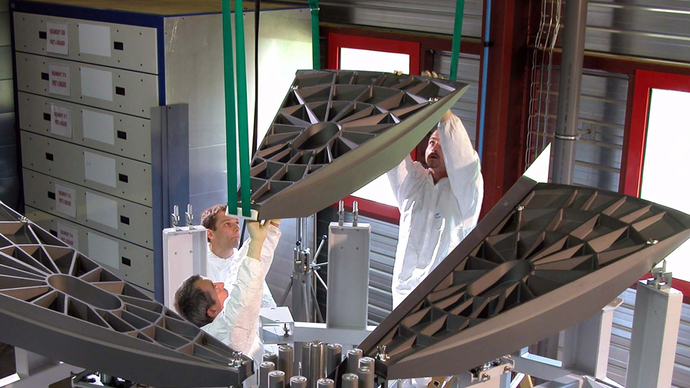 Unlike conventional reflecting telescopes, whose mirrors are made from special glass or sometimes metal, Herschel's telescope mirrors are being made from a novel ceramic material.

The manufacture of the shaped blank that will be used to create the flight model primary mirror for Herschel's telescope was completed late last year. The blank is 3.5 metres in diameter and was fabricated by brazing together twelve segments. The segments were formed by isostatic pressing and sintering of silicon carbide. The mirror blank is the biggest silicon carbide structure in the world and, when completed, the mirror will be the largest single-component telescope reflector ever made for use in space. Larger mirrors are planned for future missions but they will be composed of multiple, deployable sections.

All the major telescope components - the primary and secondary mirrors and the hexapod that supports the secondary mirror - are made from silicon carbide, allowing the telescope mass to be reduced to 300 kg rather than the 1.5 tonnes that would have resulted from using conventional materials. In addition to substantial mass savings, silicon carbide also offers the excellent structural stability and thermal properties needed to maintain a mirror location accuracy of better than 10 µm.

The mirror blank will now be machined by Boostec to remove the internal stiffeners, used to provide mechanical stability during manufacture, and reduce the shell thickness to 2.5 mm. After machining, the mirror will be polished by Opteon (Turku, Finland) to obtain a parabolic surface with a roughness of less than 30 nm. The mirror accuracy will be such that the completed telescope will have a total wavefront error of less than 6 µm RMS.

The polished mirror will be coated by vacuum deposition at the Calar Alto Observatory (Almería, Spain), first with a 10 nm thick adhesive layer of nickel-chrome and then with a 300 nm reflective layer of aluminium. To protect the aluminium from corrosion caused by water vapour in the Earth's atmosphere, it will be coated with a layer of silicon-based polymer. 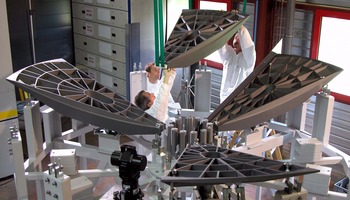