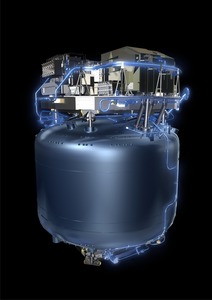 The telescope focussed light onto three instruments: PACS and SPIRE, which each contained a photometer and low-to-medium resolution spectrometer, and HIFI, an extremely high-resolution heterodyne spectrometer.

They were designed for deep, wideband photometry (with high spatial resolution thanks to Herschel's large 3.5 meter mirror) and full spectral coverage, making Herschel the first space facility to completely cover the far infrared and submillimeter range. Together, PACS and SPIRE were capable of detecting light from 57-670 microns in wavelength. HIFI covered 480-1250 and 1410-1910 GHz (which corresponds to about 157-625 microns).

The three instruments were designed to compliment each other. SPIRE and PACS had imaging spectrometers that provide spatial information, while HIFI resolved with very high spectral resolution, but only one line at a time and in only one beam on the sky.

The emission lines of the main interstellar cooling agents are predominantly in the PACS range, but fall into the SPIRE wavelength range for very distant and hence highly redshifted objects. The combination of both instruments provided the full range of information needed to determine SEDs (spectral energy distributions - the total amount of power radiated by cosmic objects, measured in watts), photometric redshifts, total luminosity, and accurate positions.

SPIRE and PACS both conducted deep surveys with their photometers to find galaxies from the early Universe, and follow up with spectroscopic studies of the most interesting objects.

Observing light in that range means that Herschel detected subtle "heat" emissions from very cold objects, such as vast clouds of interstellar dust. The spacecraft had to keep its instruments cold because their electronics work only at frigid temperatures, and to prevent the instruments' own infrared radiation from drowning out the faint signals they're trying to detect.

The instruments were housed in a cryostat filled with more than 2,000 liters of superfluid helium. Based on technology developed for the Infrared Space Observatory (ISO), it kept the instruments at a temperature of less than -271° Celsius, which is less then three degrees above absolute zero. The bolometers aboard PACS and SPIRE were chilled even further, to -273.3° Celsius, just a few tenths of a degree above absolute zero. 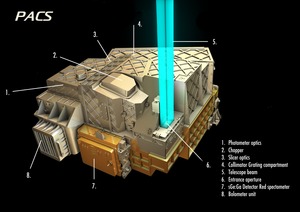 In photometry mode, PACS simultaneously imaged in two bands, one of either 90 - 130 µm together with over fields of view of 1.75 × 3.5 arcminutes with full beam sampling in each band.

In spectroscopy mode, PACS imaged a field of about 50 × 50 arcseconds, resolved into 5 × 5 pixels, with an instantaneous velocity coverage of about 1500 kms-1 and a velocity resolution of between 150 and 200 kms-1. 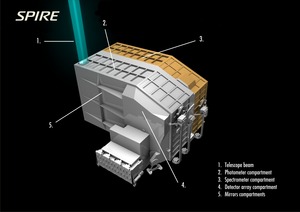 The SPIRE spectrometer was based on the Mach-Zehnder configuration. One input port received the incoming beam from the telescope while the second port accepted a signal from a calibration source. The two output ports each had a detector array, one for (37 detectors) and the other for (19 detectors). The spectrometer was operated in continuous scan mode. The spectral resolution could be adjusted in the range between 0.04 and 2 cm-1, corresponding to λ/Δλ of 20 to 1000 at 250 µm. The SPIRE spectrometer had a circular field of view 2.6 arcminutes across. 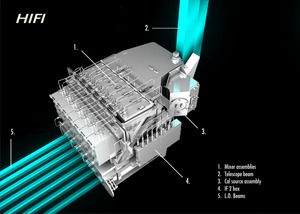 HIFI was a very high-resolution heterodyne spectrometer. The heterodyne detection principle involves translating the frequency range of the astronomical signal being observed to a lower frequency where it is easier to perform the required measurements. This is done by mixing the incoming signal with a very stable monochromatic signal, generated by a local oscillator, and extracting the difference frequency for further processing. HIFI observed in seven bands covering 480 to 1910 Ghz, or the wavelength range 157-625 µm. Bands one to five, which gave continuous coverage from 480 to 1250 GHz, used superconductor-insulator-superconductor (SIS) mixers. Bands six low and six high covered 1410 to 1910 GHz and used hot electron bolometer (HEB) mixers.

The difference signal from the heterodyne process was passed to the instrument spectrometers, housed in the service module. There were two spectrometers, a Wide Band Spectrometer and High Resolution Spectrometer, each of which was capable of processing signals of both polarisations simultaneously.