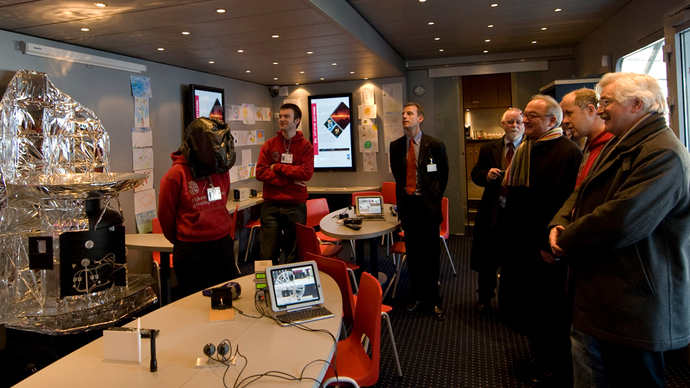 A thrilling launch to the International Year of Astronomy (IYA2009) is taking place at the United Nations Educational, Scientific and Cultural Organisation (UNESCO) Headquarters in Paris on 15 and 16 January 2009. Events include showcases of two major ESA contributions to IYA2009: the Planck Dome and the Groningen Discovery Truck featuring Herschel.

The start to the International Year of Astronomy has been exceptional with 900 delegates attending the two day opening ceremony. The dynamic programme features the breath and depth of astronomy including: discussions on the role of astronomy in society and culture, presentations on the highlights of modern day astronomy, real-time observations and live video conference with some of the remotest observatories on Earth - the South Pole Station and the European Very Large Telescope at Paranal in Chile.

In 2009 ESA will launch two major astronomical spacecraft, Herschel and Planck, providing a first-class scientific contribution to astronomy. Two projects that celebrate the launch of these significant missions are on display at the official International Year of Astronomy 2009 opening ceremony. The Planck Dome and the Groningen Discovery Truck featuring Herschel are open for delegates and the public to visit on both days. Both projects have already received substantial interest from both participants and the media. Prominent guests to the Planck Dome and the Discovery Truck include ESA's Director General, Jean-Jacques Dordain and Director of Science, David Southwood.

The Planck Dome - Looking back to the dawn of time

Walk into the 10m Planck Dome and see the sky as it will be observed by Planck. A model of the spacecraft takes centre stage in the middle of the dome, demonstrating how this surveying satellite will scan the sky. In tandem, a high-tech simulation of the Cosmic Microwave Background is projected onto the dome. This project is an initiative of François Bouchet on behalf of the French representatives in the HFI Consortium, and was created with the support of CNES, CNRS, ESA and Thales Alenia Space. During 2009 the Planck Dome will travel to a number of venues around France.

The Groningen Discovery Truck is a mobile, interactive, discovery exposition bringing science to students and the general public in the Netherlands. Since mid-2008, the exhibit has included a section with the theme of "Discover the Invisible Universe" featuring the Herschel mission. This project was developed by a team of astronomers led by Peter Barthel and Gijs Verdoes Kleijn from the Rijksuniversiteit Groningen, The Netherlands, and was awarded the Academische Jaarprijs for 2008 - awarded annually in The Netherlands for excellence in science communication. 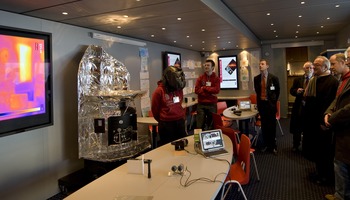 Inside the Groningen Discovery Truck