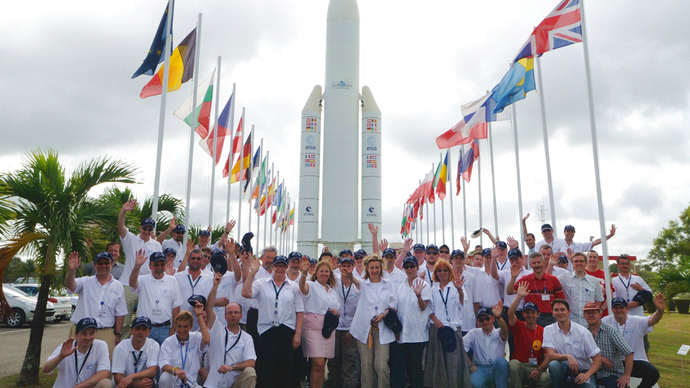 As the launch date for Herschel and Planck approaches the launch campaign teams, who are busy preparing both spacecraft for this momentous event, have taken time out for a group photograph.

Many years of dedicated hard work go into the development and construction of modern satellites, especially state-of-the-art science missions as embodied by the Herschel Space Observatory and by the Planck Surveyor. In the case of the large flagship missions, of which Herschel is an example, up to twenty years can elapse from the time of the original mission proposal, through the design, construction and testing phase, to the final assembly of the spacecraft and payload. For many people this can represent a significant part of their career.

Since mid-February, up to 150 people from ESA, Industry and scientific institutes, some of whom have worked on Herschel or Planck since the early days of these missions, have been preparing the spacecraft for launch. The meticulous preparations require the smooth and seamless collaboration of all parties - a real team effort.

With preparations going well, the teams took a few moments out of their busy schedules to pose for group photographs inside the clean room in front of the spacecraft, and also outside.

The Herschel Space Observatory - exploring the formation of galaxies and stars

The Herschel Space Observatory was originally proposed, in 1985, as a candidate cornerstone mission of ESA's Horizon 2000 scientific programme, the predecessor to today's Cosmic Vision programme. (At the time it was called FIRST, the Far Infrared Space Telescope.)

This large, far-infrared and sub-millimetre space observatory draws on state-of-the-art techniques for its instrument detectors, and for the cryogenic cooling system that ensures the detectors will perform optimally. Advanced materials and innovative fabrication techniques have been used to manufacture the 3.5-m diameter primary mirror, the largest single mirror built for a space telescope. These have ensured that the weight of the mirror was kept to a minimum - an important factor in maintaining the payload within the launch mass supported by the Ariane 5 ECA.

Planck - looking back to the dawn of time

The Planck mission to map the cosmic microwave background was selected in 1992 as the third medium mission of the Horizon 2000 scientific programme.

This all-sky survey mission will measure temperature variations on the sky of the order of millionths of a degree. In order to achieve this precision the Planck instruments must be cooled, in the case of the High Frequency Instrument (HFI) down to 0.1 K. This cooling challenge is made possible as a result of a sophisticated cooling chain, employing three coolers with, at the low temperature end, an innovative cooling technique, the dilution refrigerator, specifically developed for the Planck mission. 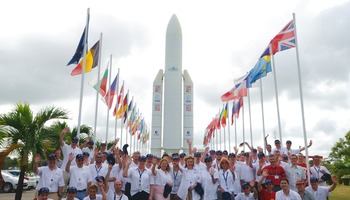