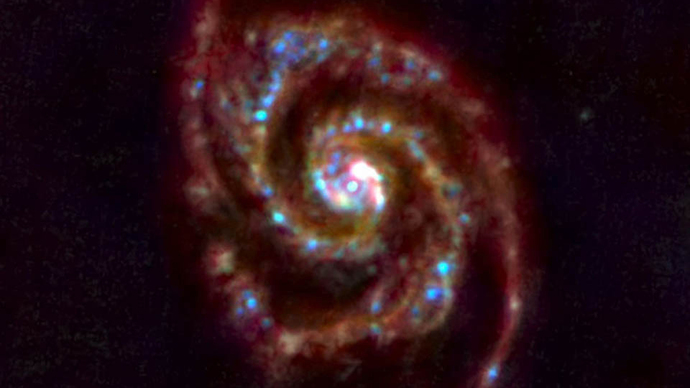 The Herschel Space Observatory has snapped its first picture since blasting into space on May 14, 2009. The mission, led by the European Space Agency with important participation from NASA, will use infrared light to explore our cosmic roots, addressing questions of how stars and galaxies are born.

The new "sneak preview" image was taken in an early attempt to demonstrate that Herschel works, and, in particular, that its telescope is focused and correctly aligned with the science instruments, and to whet our appetites for what's yet to come. It shows the Whirlpool galaxy, which lies relatively nearby, about 35 million light-years away, in the constellation Canes Venatici.

The galaxy was first observed by Charles Messier in 1773, who gave the beauty its official name of Messier 51. Back then, astronomers, including William Herschel, the observatory's namesake, catalogued objects like these as fuzzy nebulae without knowing their true nature. Later, Messier 51 became one of the first of these fuzzy objects observed to have a spiral structure, a finding that eventually led to the revelation that galaxies full of stars exist far from our own.

The image is a composite of infrared light captured with Herschel's Photoconductor Array Camera and Spectrometer at three wavelengths: 70, 100 and 160 microns. Herschel's full wavelength range spans 55 to 672 microns. The blue and white areas show where stars are actively forming, while the brown regions contain cold dust. The brightest blue dot at top left is a smaller, companion galaxy.

Longer-wavelength light inherently does not produce pictures with resolution as high as those obtained at shorter wavelengths, such as visible light. However, because Herschel's mirror is the largest infrared astronomy mirror ever launched in space (3.5 meters, or about 11.5 feet across), it can take the sharpest pictures to date at the particular wavelengths it observes.

During its prime mission phase, NASA's Spitzer Space Telescope, also a space-based infrared telescope, could see shorter-wavelength light, with wavelengths ranging from 3.6 to 160 microns. Because the two telescopes are able to see, for the most part, different wavelengths of light, their results complement each other, highlighting the multifaceted features of cosmic objects. Spitzer's shorter-wavelength infrared view of the Whirlpool galaxy, in comparison to a visible-light view, can be seen in the Spitzer Space Telescope image gallery.

Herschel is in the final stretches of its journey to the second Lagrange point of the Earth-sun system. The observatory will spend its lifetime, estimated to be at least three-and-a-half-years, orbiting this point, which is about 1.5 million kilometers (930,000 miles) from Earth on the opposite side of our planet from the sun. After a cover protecting the telescope's instruments was popped open on June 14, engineers and scientists commanded the telescope to take its first test picture. The telescope is still being commissioned, with science observations expected to begin later this year.

Herschel is a European Space Agency cornerstone mission, with science instruments provided by a consortia of European institutes and with important participation by NASA. NASA's Herschel Project Office is based at NASA's Jet Propulsion Laboratory. JPL contributed mission-enabling technology for two of Herschel's three science instruments. The NASA Herschel Science Center, part of the Infrared Processing and Analysis Center at the California Institute of Technology in Pasadena, supports the United States astronomical community. Caltech manages JPL for NASA.

The NASA Herschel Science Center is part of the consortium that developed the Photoconductor Array Camera and Spectrometer. 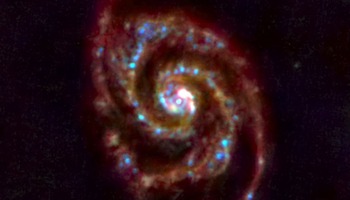 Herschels Daring Test: A Glimpse of Things to Come