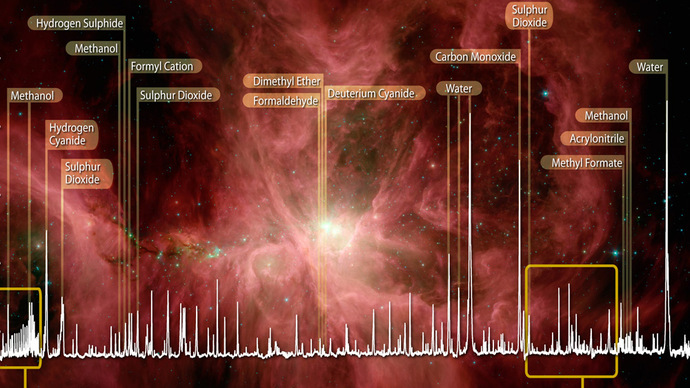 The Herschel Space Observatory has revealed the chemical fingerprints of potential life-enabling organic molecules in the Orion Nebula, a nearby stellar nursery in our Milky Way galaxy. The European Space Agency leads the Herschel mission with important participation from NASA.

This detailed-spectrum, obtained with the Heterodyne Instrument for the Far Infrared (HIFI) - one of Herschel's three innovative instruments - demonstrates the gold mine of information that Herschel-HIFI will provide on how organic molecules form in space.

The spectrum, one of the first to be obtained with HIFI since it returned to full health in January 2010 following technical difficulties, clearly demonstrates that the instrument is working well. Striking features in the HIFI spectrum include a rich, dense pattern of "spikes", each representing the emission of light from a specific molecule in the Orion Nebula. This nebula is known to be one of the most prolific chemical factories in space, although the full extent of its chemistry and the pathways for molecule formation are not well understood. By sifting through the pattern of spikes in this spectrum, astronomers have identified a few common molecules that appear everywhere in the spectrum. The identification of the many other emission lines is currently ongoing.

By clearly identifying the lines associated with the more common molecules, astronomers can then begin to tease out the signature of particularly interesting molecules that are the direct precursors to life-enabling molecules. A characteristic feature of the Orion spectrum is the spectral richness: among the molecules that can be identified in this spectrum are water, carbon monoxide, formaldehyde, methanol, dimethyl ether, hydrogen cyanide, sulfur oxide, sulfur dioxide and their isotope analogues. It is expected that new organic molecules will also be identified.

"This HIFI spectrum, and the many more to come, will provide a virtual treasure trove of information regarding the overall chemical inventory and on how organics form in a region of active star formation. It harbors the promise of a deep understanding of the chemistry of space once we have the full spectral surveys available," said Edwin Bergin of the University of Michigan, principal investigator of the HEXOS Key Program on Herschel.

HIFI was designed to provide extremely high-resolution spectra and to open new wavelength ranges for investigation, which are inaccessible to ground-based telescopes. "It is astonishing to see how well HIFI works," said Frank Helmich, HIFI principal investigator of SRON Netherlands Institute for Space Research. "We obtained this spectrum in a few hours and it already beats any other spectrum, at any other wavelength, ever taken of Orion. Organics are everywhere in this spectrum, even at the lowest levels, which hints at the fidelity of HIFI. The development of HIFI took eight years but it was really worth waiting for."

"HIFI's unprecedented high resolution and stability allows us to construct very detailed models of the density and temperature structure of star-forming clouds," said Tom Phillips of the California Institute for Technology. "This view allows us to pierce the veil of star formation and more directly study the chemistry associated with the birth of stars, planets, and in some sense, life."

The spectrum was obtained only one month after HIFI resumed operations on-board Herschel. In August 2009, HIFI experienced an unexpected voltage spike in the electronic system, probably caused by a high-energy cosmic particle, resulting in the instrument shutting down. The mission team studied the problem and developed a solution that prevents harmful side-effects of this type of event. On 14 January 2010, HIFI was successfully switched back on using its spare electronics and restarted a sequence of testing and verification, ahead of science observations commencing on 28 February. It now rejoins the other two Herschel instruments, SPIRE and PACS, in their exploration of the far-infrared Universe.

About Herschel and HIFI

Herschel is an ESA space observatory with science instruments provided by European-led Principal Investigator consortia, with important participation from NASA.

The enormous improvement in sensitivity and frequency coverage afforded by HIFI is a result of intense technology development at JPL supported by NASA over more than a decade. An innovative approach to providing the broad frequency coverage was developed using devices for frequency multiplication fabricated at JPL in conjunction with industry-developed amplifiers. The detectors and readout electronics used in Herschel's SPIRE instrument were also developed and fabricated at JPL.

Identification of the many spectral features visible in the Orion spectrum with transitions of particular molecular species requires sophisticated molecular spectroscopy databases, which collect the results from many years of laboratory spectroscopy work. The assignments for this HIFI spectrum were made using the Cologne Database of Molecular Spectroscopy (CDMS) and an equivalent database maintained at NASA's Jet Propulsion Laboratory. 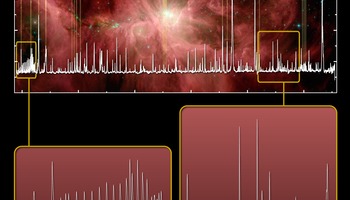 HIFI Spectrum of Water and Organics in the Orion Nebula