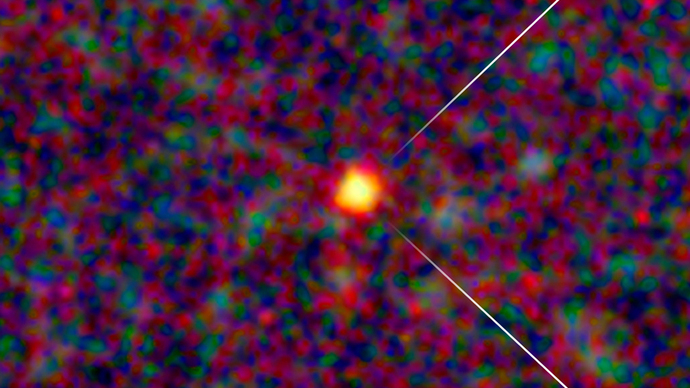 PASADENA, Calif. -- It turns out the Herschel Space Observatory has a trick up its sleeve. The telescope, a European Space Agency mission with important NASA contributions, has proven to be excellent at finding magnified, faraway galaxies. Like little kids probing patches of dirt for insects, astronomers can use these new cosmic magnifying lenses to study galaxies that are hidden in dust.

"I was surprised to learn that Herschel is so good at finding these cosmic lenses," said Asantha Cooray of the University of California, Irvine. "Locating new lenses is an arduous task that involves slogging through tons of data. With Herschel, we can find a lot of them much more efficiently." Cooray is a co-author of a paper about the discovery, appearing in the Nov. 5 issue of the journal Science. The lead author is Mattia Negrello of the Open University in the United Kingdom.

A cosmic magnifying lens occurs when a massive galaxy or cluster of galaxies bends light from a more distant galaxy into a warped and magnified image. Sometimes, a galaxy is so warped that it appears as a ring -- an object known as an Einstein ring after Albert Einstein who first predicted the phenomenon, referred to as gravitational lensing. The effect is similar to what happens when you look through the bottom of a soda bottle or into a funhouse mirror.

These lenses are incredibly powerful tools for studying the properties of distant galaxies as well as the mysterious stuff -- dark matter and dark energy -- that makes up a whopping 96 percent of our universe (see http://www.jpl.nasa.gov/news/news.cfm?release=2010-272).

"With these lenses, we can do cosmology and study galaxies that are too distant and faint to be seen otherwise," said Cooray.

Cooray and a host of international researchers made the initial discovery using Herschel. Launched in May 2009, this space mission is designed to see longer-wavelength light than that we see with our eyes -- light in the far-infrared and submillimeter portion of the electromagnetic spectrum. Scanning Herschel images of thousands of galaxies, the researchers noticed five never-before-seen objects that jumped out as exceptionally bright.

At that time, the galaxies were suspected of being magnified by cosmic lenses, but careful and extensive follow-up observations were required. Numerous ground-based telescopes around the world participated in the campaign, including the National Radio Astronomy Observatory's Green Bank Telescope in West Virginia, and three telescopes in Hawaii: the W.M. Keck Observatory, the California Institute of Technology's Submillimeter Observatory, and the Smithsonian Astrophysical Observatory's Submillimeter Array.

The results showed that all five of the bright galaxies were indeed being magnified by foreground galaxies. The galaxies are really far away -- they are being viewed at a time when the universe was only two to four billion years old, less than a third of its current age.

The Herschel astronomers suspect that they are just scratching the surface of a much larger population of magnified galaxies to be uncovered. The images studied so far make up just two percent of the entire planned survey, a program called the Herschel Astrophysical Terahertz Large Area Survey, or Herschel-ATLAS.

"The fact that this Herschel team saw five lensed galaxies is very exciting," said Paul Goldsmith, the U.S. project scientist for Herschel at NASA's Jet Propulsion Laboratory, Pasadena, Calif. "This means that we can probably pick out hundreds of new lensed galaxies in the Herschel data."

The five galaxies are young and bursting with dusty, new stars. The dust is so thick, the galaxies cannot be seen at all with visible-light telescopes. Herschel can see the faint warmth of the dust, however, because it glows at far-infrared and submillimeter wavelengths. Because the galaxies are being magnified, astronomers can now dig deeper into these dusty, exotic places and learn more about what makes them tick.

Herschel is a European Space Agency cornerstone mission, with science instruments provided by consortia of European institutes and with important participation by NASA. NASA's Herschel Project Office is based at NASA's Jet Propulsion Laboratory. JPL contributed mission-enabling technology for two of Herschel's three science instruments. The NASA Herschel Science Center, part of the Infrared Processing and Analysis Center at the California Institute of Technology in Pasadena, supports the U.S. astronomical community. Caltech manages JPL for NASA. 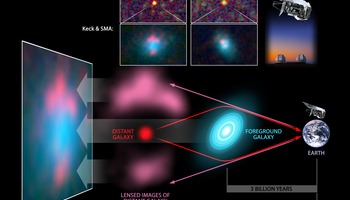 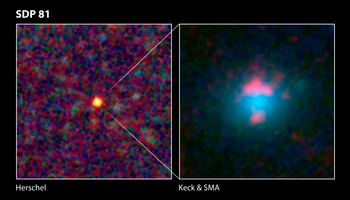