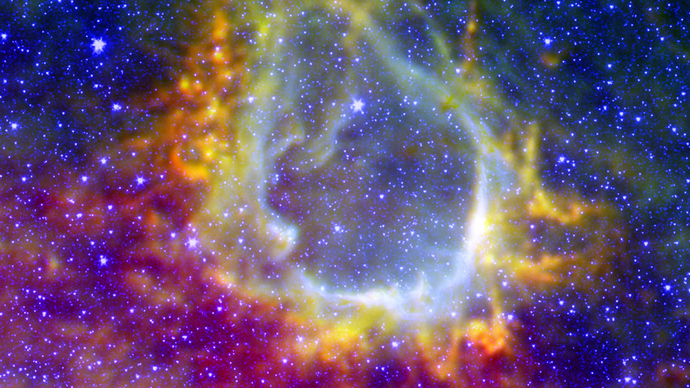 Ring in the Sky

Herschel observes in the far-infrared, which allows it to see cold gas and dust between the stars. But many of the greatest discoveries in astronomy have been achieved by combining observations from telescopes observing at different wavelengths. NASA's Spitzer satellite has observed a starforming region that goes by the name of "RCW 120", which was one of the first images released from Herschel. The composite below shows the power of combining these two spectacular images.

Spitzer and Herschel both clearly see the ring of material, which is being heated and compressed by the intense ultraviolet light from hot, massive stars in the centre. Seen in the near-infrared by Spitzer, these stars don't stand out against the background of others seen in the image. The coldest dust is only seen by Herschel in far-infrared wavelengths, and lies around the edge of the ring, seen as red and yellow in this image. The warmer dust in the ring also glows at the shorter wavelengths which Spitzer measures. The shorter wavelengths allow Spitzer to observe the dusty ring in exquisite detail, but do not show the colder dust.

The biggest surprise in the image is the bright white blob on the left edge of the ring. The Herschel measurements show that this is a star in the process of forming, which has already grown to ten times the mass of the Sun. There is still plenty of room for growth, though, and this proto-star could end up being one of the largest in our Galaxy, possibly hundreds of times the mass of our Sun.

Current theories struggle to explain how such massive stars form, but observations by Herschel are allowing astronomers to understand the processes involved. Understanding the role of all the material involved requires observations from many telescopes at a wide range of wavelengths.

Rings like this can be seen all over the sky, but finding them is a huge task and the Spitzer team are asking for help. The Milky Way Project is a citizen science project through which the public can browse hundreds of thousands of Spitzer images, looking for objects similar to RCW 120 located throughout our Galaxy. 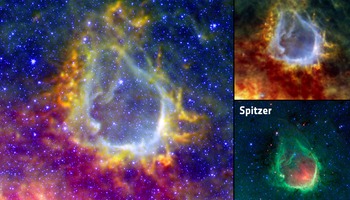 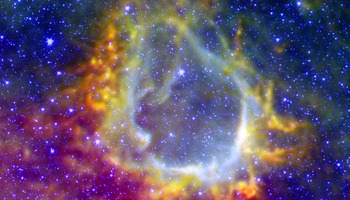