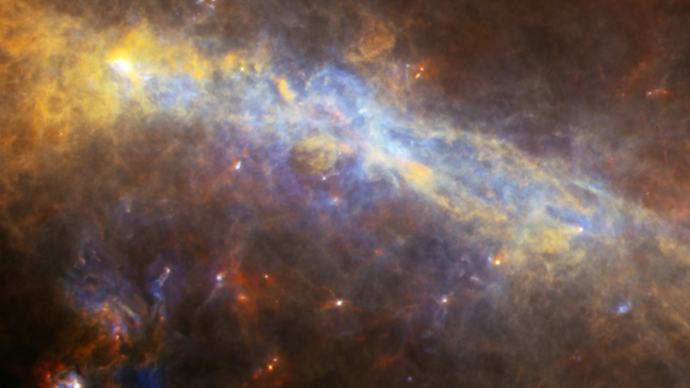 New observations from the Herschel Space Observatory show a bizarre, twisted ring of dense gas at the center of our Milky Way galaxy. Only a few portions of the ring, which stretches across more than 600 light-years, were known before. Herschel's view reveals the entire ring for the first time, and a strange kink that has astronomers scratching their heads.

"We have looked at this region at the center of the Milky Way many times before in the infrared," said Alberto Noriega-Crespo of NASA's Infrared Processing and Analysis Center at the California Institute of Technology in Pasadena. "But when we looked at the high-resolution images using Herschel's sub-millimeter wavelengths, the presence of a ring is quite clear." Noriega-Crespo is co-author of a new paper on the ring published in a recent issue of Astrophysical Journal Letters.

The Herschel Space Observatory is a European Space Agency-led mission with important NASA contributions. It sees infrared and sub-millimeter light, which can readily penetrate through the dust hovering between the bustling center of our galaxy and us. Herschel's detectors are also suited to see the coldest stuff in our galaxy.

When astronomers turned the giant telescope to look at the center of our galaxy, it captured unprecedented views of its inner ring -- a dense tube of cold gas mixed with dust, where new stars are forming.

Astronomers were shocked by what they saw -- the ring, which is in the plane of our galaxy, looked more like an infinity symbol with two lobes pointing to the side. In fact, they later determined the ring was torqued in the middle, so it only appears to have two lobes. To picture the structure, imagine holding a stiff, elliptical band and twisting the ends in opposite directions, so that one side comes up a bit.

"This is what is so exciting about launching a new space telescope like Herschel," said Sergio Molinari of the Institute of Space Physics in Rome, Italy, lead author of the new paper. "We have a new and exciting mystery on our hands, right at the center of our own galaxy."

Observations with the ground-based Nobeyama Radio Observatory in Japan complemented the Herschel results by determining the velocity of the denser gas in the ring. The radio results demonstrate that the ring is moving together as a unit, at the same speed relative to the rest of the galaxy.

The ring lies at the center of our Milky Way's bar -- a bar-shaped region of stars at the center of its spidery spiral arms. This bar is actually inside an even larger ring. Other galaxies have similar bars and rings. A classic example of a ring inside a bar is in the galaxy NGC 1097, imaged here by NASA's Spitzer Space Telescope. http://www.spitzer.caltech.edu/images/2687-ssc2009-14a-Coiled-Creature-of-the-Night The ring glows brightly in the center of the galaxy's large bar structure. It is not known if that ring has a kink or not.

The details of how bars and rings form in spiral galaxies are not well understood, but computer simulations demonstrate how gravitational interactions can produce the structures. Some theories hold that bars arise out of gravitational interactions between galaxies. For example, the bar at the center of our Milky Way might have been influenced by our largest neighbor galaxy, Andromeda.

An abstract and full PDF of the Astrophysical Journal Letters study is online at http://arxiv.org/abs/1105.5486. 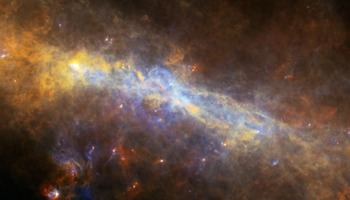 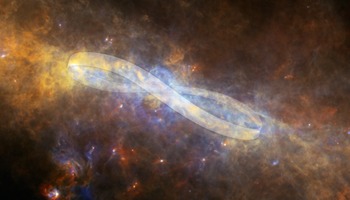