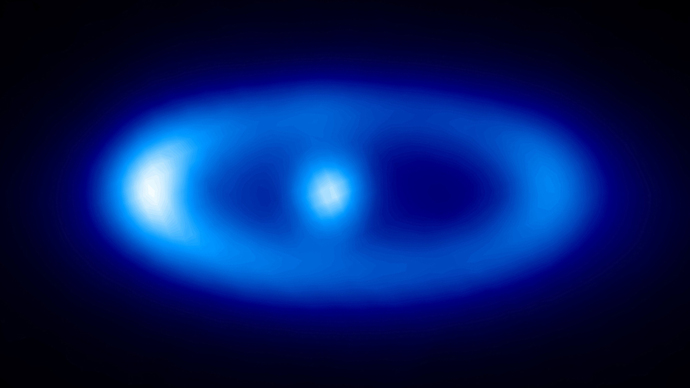 The Herschel Space Observatory has studied the dusty belt around the nearby star Fomalhaut. Scientists say the dust appears to be coming from collisions that destroy up to thousands of icy comets every day.

Fomalhaut is a young star, just a few hundred million years old, and twice as massive as the sun. Its dust belt was discovered in the 1980s by the Infrared Astronomical Satellite, in which NASA played a key role. Herschel's new images of the belt show it in much more detail at longer infrared wavelengths than ever before.

The results indicate the grains in the dust belt are fluffy and tiny, only a few millionths of a meter across (one meter is about 3 feet). They are similar to dust particles released from comets in our own solar system.

Bram Acke of the University of Leuven in Belgium led the observations. He and his colleagues say the dust is being regenerated in the belt through continuous collisions between comets. Each day, the equivalent of either two comets 6.2 miles in size (10 kilometers) or 2,000 comets .62 miles in size (1 kilometer) must be completely crushed into small fluffy, dust particles. What's more, there are a ton of comets: the team estimates between 260 billion and 83 trillion in the belt!