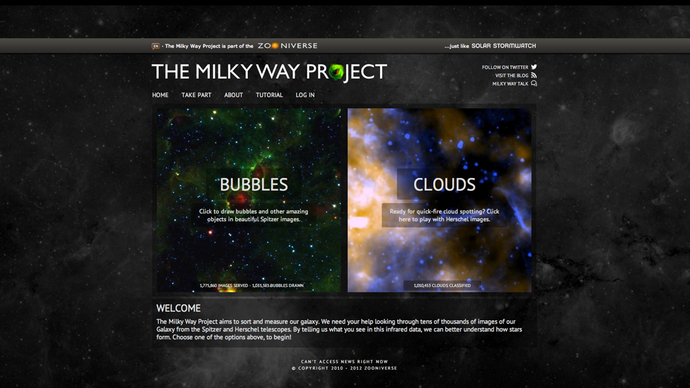 A new galactic game launches today that lets citizen scientists identify the glowing clouds where future stars will be born. The online experience, called Clouds, is a new addition to the Milky Way Project, where everyone can help astronomers to sort and measure our galaxy. Clouds features images and data from NASA's Spitzer Space Telescope and the Herschel Space Observatory, a European Space Agency mission with important participation from NASA.

In the rapid-fire game, players gauge whether a targeted section of a presented image is a cloud, a "hole" - an empty region of space - or something in between. The cataloging of these snapshots of the local cosmos will help astronomers learn more about the architecture and character of our home galaxy, the Milky Way.

The organizers of Clouds encourage astronomy enthusiasts to start playing now because with enough participation, important insights into the Milky Way could come as soon as early next year.

"We're really excited to launch Clouds and see results back from our giant volunteer team of amateur scientists," said Robert Simpson, a postdoctoral researcher in astronomy at Oxford University, England and principal investigator of the Milky Way Project. "We think the community can blast through all these data fairly quickly. We may even be done by the spring and that would be an amazing result for citizen science."

Clouds joins its predecessor Milky Way Project game, Bubbles, as one of the many "crowdsourced" efforts underway at Zooniverse, home to the Internet's biggest and most popular online citizen science projects.

The crowdsourcing concept involves having a lot of people evaluate the same image or pieces of data. A consensus decision on some aspect of the image is then reached through the collective "wisdom of crowds." Crowdsourced citizen science becomes especially important when humans can do a better job at analyzing images or objects than a computer can. The Clouds game is an example of just such an exercise in which eyeballs and brains beat out cameras and computer algorithms.

The goal of Clouds is to tag the dense, cold cores of gas and dust known as infrared dark clouds. These clouds collapse under their own gravity and then burst forth as new stars. An empty region of space, however, can look rather like one of these dark clouds and deceive a computer accordingly. "Automated routines have tried to decide which of these objects are holes and which are true infrared dark clouds, but the task is often tricky and it takes a human eye to decide," said Simpson.

Clouds combines infrared observations from Herschel and Spitzer to reveal cool clouds and holes throughout the Milky Way's disk. The Herschel data, at a wavelength of 250 microns, appears in yellow throughout the game. The Spitzer data, at 8 microns, is rendered in blue.

Together with its companion Bubbles game, Clouds serves as another example of how Zooniverse makes cutting-edge scientific investigation freely available to the general public. "Citizen science through Zooniverse has been a real boon to research in fields ranging from astronomy to biology to history," noted Simpson. "We feel very fortunate to be able to send science work out to computer, tablet and smartphone screens and for people to collaborate with us in a quest to better understand our universe."

For those interested in looking for infrared clouds and contributing to the Milky Way Project, visit the following link: http://www.milkywayproject.org. To learn of other citizen science-based efforts, check out the Zooniverse: https://www.zooniverse.org/.