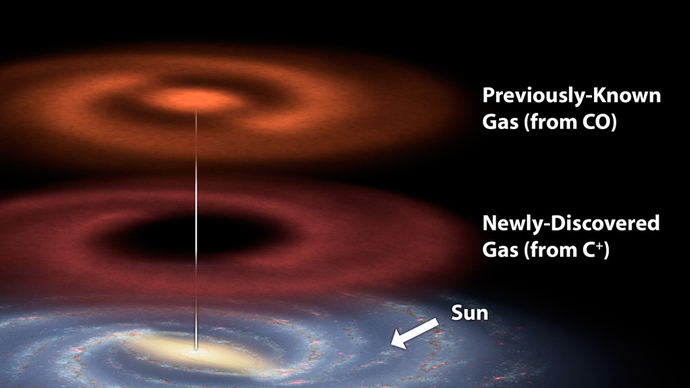 Shining a Light on Cool Pools of Gas in the Galaxy

Newly formed stars shine brightly, practically crying out, "Hey, look at me!" But not everything in our Milky Way galaxy is easy to see. The bulk of material between the stars in the galaxy -- the cool hydrogen gas from which stars spring -- is nearly impossible to find.

A new study from the Hershel Space Observatory, a European Space Agency mission with important NASA participation, is shining a light on these hidden pools of gas, revealing their whereabouts and quantities. In the same way that dyes are used to visualize swirling motions of transparent fluids, the Herschel team has used a new tracer to map the invisible hydrogen gas.

The discovery reveals that the reservoir of raw material for making stars had been underestimated before -- almost by one third -- and extends farther out from our galaxy's center than known before.

"There is an enormous additional reservoir of material available to form new stars that we couldn't identify before," said Jorge Pineda of NASA's Jet Propulsion Laboratory, Pasadena, Calif., lead author of a new paper on the findings published in the journal Astronomy and Astrophysics.

"We had to go to space to solve this mystery because our atmosphere absorbs the specific radiation we wanted to detect," said William Langer of JPL, principal investigator of the Herschel project to map the gas. "We also needed to see far-infrared light to pinpoint the location of the gas. For both these reasons, Herschel was the only telescope for the job."

Stars are created from clouds of gas, made of hydrogen molecules. The first step in making a star is to squeeze gas together enough that atoms fuse into molecules. The gas starts out sparse but, through the pull of gravity and sometimes other constricting forces, it collects and becomes denser. When the hydrogen gets dense enough, nuclear fusion takes place and a star is born, shining with starlight.

Astronomers studying stars want to follow this journey, from a star's humble beginnings as a cloud of molecules to a full-blown blazing orb. To do so requires mapping the distribution of the stellar hydrogen fuel across the galaxy. Unfortunately, most hydrogen molecules in space are too cold to give off any visible light. They lurk unseen by most telescopes.

For decades, researchers have turned to a tracer molecule called carbon monoxide, which goes hand-in-hand with the hydrogen molecules, revealing their location. But this method has limitations. In regions where the gas is just beginning to pool -- the earliest stage of cloud formation -- there is no carbon monoxide.

"Ultraviolet light destroys the carbon monoxide," said Langer. "In the space between stars, where the gas is very thin, there is not enough dust to shield molecules from destruction by ultraviolet light."

A different tracer -- ionized carbon - does, however, linger in these large but relatively empty spaces, and can be used to pin down the hydrogen molecules. Researchers have observed ionized carbon from space before, but Herschel has, for the first time, provided a dramatically improved geographic map of its location and abundance in the galaxy.

"Thanks to Herschel's incredible sensitivity, we can separate material moving at different speeds," said Paul Goldsmith, a co-author and the NASA Herschel Project Scientist at JPL. "We finally can get the whole picture of what's available to make future generations of stars."

Read a more in-depth story about this research from the European Space Agency at http://sci.esa.int/science-e/www/object/index.cfm?fobjectid=51909. The technical paper is online at http://arxiv.org/abs/1304.7770. 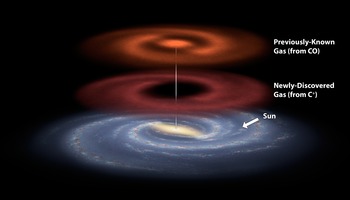 Mapping Invisible Pools of Gas in Our Galaxy