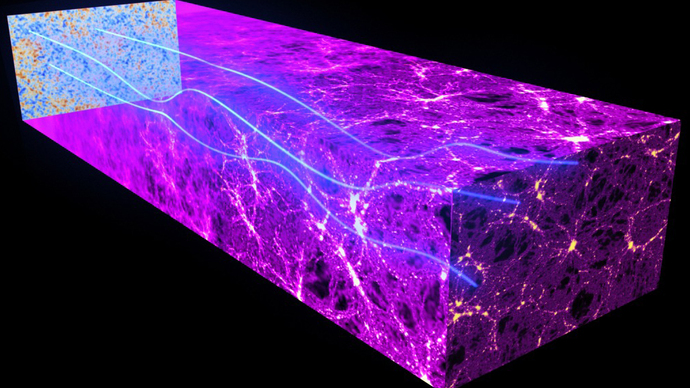 The journey of light from the very early universe to modern telescopes is long and winding. The ancient light traveled billions of years to reach us, and along the way, its path was distorted by the pull of matter, leading to a twisted light pattern.

This twisted pattern of light, called B-modes, has at last been detected. The discovery, which will lead to better maps of matter across our universe, was made using the National Science Foundation's South Pole Telescope, with help from the Herschel space observatory.

Scientists have long predicted two types of B-modes: the ones that were recently found were generated a few billion years into our universe's existence (it is presently 13.8 billion years old). The others, called primordial, are theorized to have been produced when the universe was a newborn baby, fractions of a second after its birth in the Big Bang.

"This latest discovery is a good checkpoint on our way to the measurement of primordial B-modes," said Duncan Hanson of McGill University in Montreal, Canada, lead author of the new report published Sept. 30 in the online edition of Physical Review Letters.

The elusive primordial B-modes may be imprinted with clues about how our universe was born. Scientists are currently combing through data from the Planck mission in search of them. Both Herschel and Planck are European Space Agency missions, with important NASA contributions.

The oldest light we see around us today, called the cosmic microwave background, harkens back to a time just hundreds of thousands of years after the universe was created. Planck recently produced the best-ever full-sky map of this light, revealing new details about of our cosmos' age, contents and origins (see http://www.jpl.nasa.gov/news/news.php?release=2013-109 ). A fraction of this ancient light is polarized, a process that causes light waves to vibrate in the same plane. The same phenomenon occurs when sunlight reflects off lakes, or particles in our atmosphere. On Earth, special sunglasses can isolate this polarized light, reducing glare.

The signals are extremely faint, so Hanson and colleagues used Herschel's infrared map of matter to get a better idea of where to look. The researchers then spotted the signals with the South Pole Telescope, making the first-ever detection of B-modes. This is an important step for better mapping how matter, both normal and dark, is distributed throughout our universe. Clumps of matter in the early universe are the seeds of galaxies like our Milky Way.

Astronomers are eager to detect primordial B-modes next. These polarization signals, from billions of years ago, would be much brighter on larger scales, which an all-sky mission like Planck is better able to see.

"These beautiful measurements from the South Pole Telescope and Herschel strengthen our confidence in our current model of the universe," said Olivier Doré, a member of the U.S. Planck science team at NASA's Jet Propulsion Laboratory, Pasadena, Calif. "However, this model does not tell us how big the primordial signal itself should be. We are thus really exploring with excitement a new territory here, and a potentially very, very old one."

Read the European Space Agency feature about this work at http://www.esa.int/Our_Activities/Space_Science/Herschel/Herschel_helps_find_elusive_signals_from_the_early_Universe.

Planck is a European Space Agency mission, with significant participation from NASA. NASA's Planck Project Office is based at JPL. JPL contributed mission-enabling technology for both of Planck's science instruments. European, Canadian and U.S. Planck scientists work together to analyze the Planck data. More information is online at http://www.nasa.gov/planck and http://www.esa.int/planck. 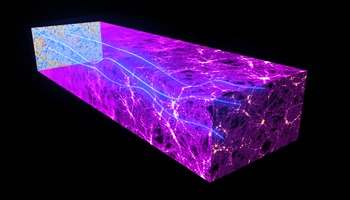