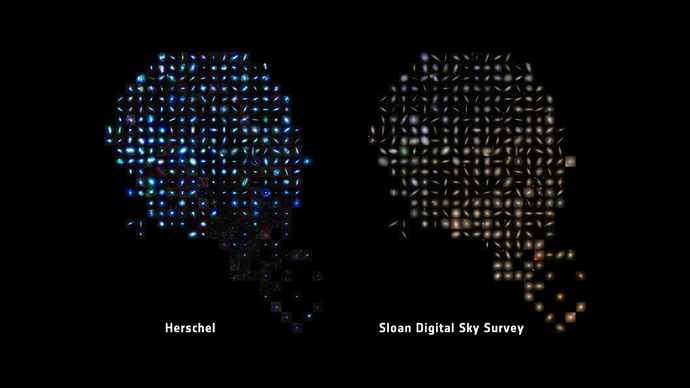 The largest census of dust in local galaxies has been completed using data from the Herschel space observatory, providing a huge legacy to the scientific community.

Cosmic dust grains are a minor but fundamental ingredient in the recipe of gas and dust for creating stars and planets. But despite its importance, there is an incomplete picture of the dust properties in galaxies beyond our own Milky Way.

Key questions include how the dust varies with the type of galaxy, and how it might affect our understanding of how galaxies evolve.

Before its retirement in April 2013, Herschel, a European Space Agency (ESA) mission with important NASA contributions, provided the largest survey of cosmic dust, spanning a wide range of nearby galaxies located 50–80 million light-years from Earth.

A sample of these galaxies is displayed in a collage, arranged from dust-rich in the top left to dust-poor in the bottom right.
The dust-rich galaxies are typically spiral or irregular, whereas the dust-poor ones are usually elliptical. Blue and red colours represent cooler and warmer regions of dust, respectively.

Dust is gently heated across a range of temperatures by the combined light of all of the stars in each galaxy, with the warmest dust being concentrated in regions where stars are being born.

For comparison, the galaxies are also shown in visible light images obtained by the Sloan Digital Sky Survey. Here, blue corresponds to young stars – hot, massive stars that burn through their fuel very quickly and are therefore short-lived.

Conversely, red stars are older population – they are less massive and cooler, and therefore live for longer.

The Herschel observations allow astronomers to determine how much light is emitted by the dust as a function of wavelength, providing a means to study the physical properties of the dust.

For example, a galaxy forming stars at a faster rate should have more massive, hot stars in it, and thus the dust in the galaxy should also be warmer. In turn, that means that more of the light emitted by the dust should come out at shorter wavelengths.

However, the data show greater variations than expected from one galaxy to another based on their star formation rates alone, implying that other properties, such as its chemical enrichment, also play an important role.

By allowing astronomers to investigate these correlations and dependencies, the survey provides a much-needed local benchmark for quantifying the role played by dust in galaxy evolution throughout the history of the Universe.

The data will complement observations being made by other telescopes, such as the ground-based Atacama Large Millimeter Array in Chile, which will allow astronomers to look at dust in galaxies to the very edge of the observable Universe. 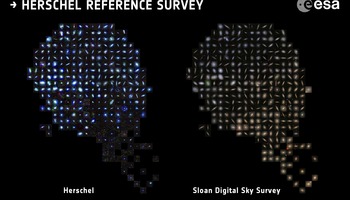 Herschel Survey in Infrared and Visible