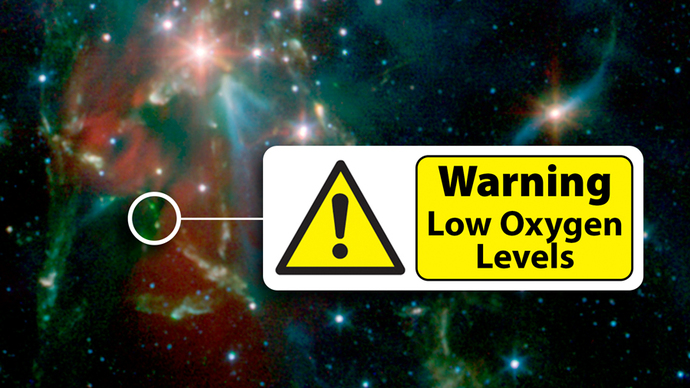 Herschel Uncovers a Dearth of Oxygen near a New Star

A cosmic mystery regarding oxygen has deepened, thanks to new findings from the Herschel Space Observatory, a European Space Agency mission with important NASA contributions. Observations of a newly forming star have revealed strangely low levels of molecular oxygen, the kind we breathe, in the emerging star's gassy, dusty environment.

Oxygen is the third most abundant element in the universe after hydrogen and helium. Yet searches in outer space for the simplest molecular version of oxygen, O2, have come up mostly empty-handed. Herschel's discovery raises questions about our understanding of the complex chemistry involved in the birth of stars and planets.

"With these new results from Herschel, we're confirming just how little molecular oxygen there is in interstellar space," said Umut Yildiz, lead author of the new paper and a molecular astrophysicist working as a Caltech postdoctoral scholar at NASA’s Jet Propulsion Laboratory and formerly at the Leiden Observatory in the Netherlands. "Along with understanding why oxygen molecules are generally so rare, we need to figure out what is special about the regions where we do find the molecules, albeit in small amounts, and what that tells us about the chemistry there and in the broader universe."

To make the discovery, Herschel had to take a good, long look at a protostar about 750 light years away. Ample observing time was needed to pick up the signatures of any molecular oxygen present in the gas- and dust-strewn neighborhood surrounding the fledging star.

Herschel detected only small traces of the two-atom oxygen molecule in the gas clouds where stars form. Specifically, astronomers found only one oxygen molecule for every six billion hydrogen molecules in the protostar's vicinity. This flies in the face of theoretical chemical models that predict 6,000 times more oxygen should have been present.

The research team thinks that most of the available oxygen must end up freezing onto dust grains around the star. The grains, along with various gases and ices, encircle the star in a so-called protoplanetary disk, from which planets, asteroids and other solar system objects will coalesce, piece by piece. The oxygen then combines with hydrogen to form water molecules rather than linking up to create molecular oxygen.

"We want to explain why so little O2 is observed in the dense envelope of the protostar," said Yildiz. "A possible explanation is that oxygen freezes out and converts into water in the early stages of star formation, so the gas and ice present in later stages, during planetary disk formation, are very poor in O2."

Findings of this sort were not possible before Herschel, and will not be again until another space telescope takes to the skies that can see in sub-millimeter light. Ground-based observatories cannot identify interstellar oxygen molecules due to the molecular oxygen in Earth's atmosphere.

The Herschel findings tie in to the origin of that Earthly, atmospheric oxygen, which is a story still being pieced together. Molecular oxygen is highly reactive, eagerly breaking apart to bind with other molecules. Accordingly, the free oxygen we breathe today could not have come from space in molecular form. Instead, our oxygen started out bound up in water, carbon dioxide and other common, simple, oxygen-containing compounds. That bound oxygen must have later been set free by life or other chemical processes.

Scientists think that the first photosynthetic microbes that emerged on Earth over 3.5 billion years ago made use of plentiful carbon dioxide, emitting oxygen as a waste product. Over hundreds of millions of years, Earth's atmosphere came to hold considerable oxygen stores, although there’s some debate over the timing of these events. Gauging available oxygen amounts and types is therefore not only key for revealing the chemistry of the rise of stars and planets, but also life.

"The oxygen molecule is one of the most essential molecules for life," said Yildiz. "It is important to search deeply near star-forming regions to understand the origin of molecular oxygen in protoplanetary disks and eventually exoplanetary atmospheres."

Herschel is a European Space Agency mission, with science instruments provided by a consortia of European institutes with important participation by NASA. NASA's Herschel Project Office is based at the agency's Jet Propulsion Laboratory in Pasadena, Calif. JPL is a division of the California Institute of Technology, Pasadena. 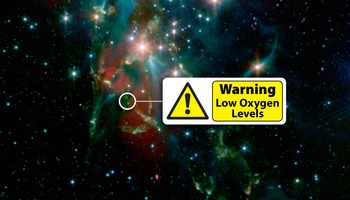 Where's All the Oxygen?