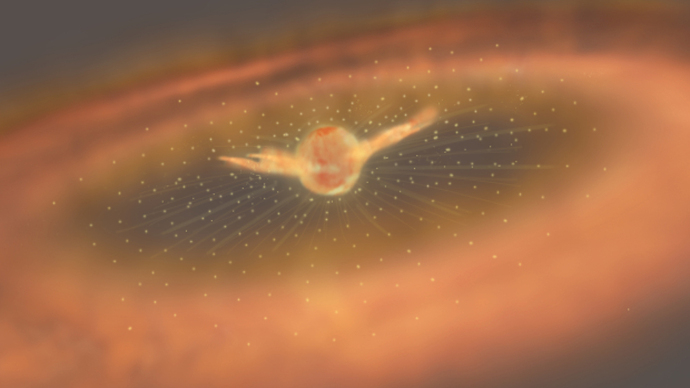 Astronomers using ESA’s Herschel space observatory to probe the turbulent beginnings of a Sun-like star have found evidence of mighty stellar winds that could solve a puzzling meteorite mystery in our own back yard.

In spite of their tranquil appearance in the night sky, stars are scorching furnaces that spring to life through tumultuous processes – and our 4.5 billion-year-old Sun is no exception. To glimpse its harsh early days, astronomers gather clues not only in the Solar System but also by studying young stars elsewhere in our Galaxy.

Using Herschel to survey the chemical composition of regions where stars are being born today, a team of astronomers has noticed that one object in particular is different.

The unusual source is a prolific stellar nursery called OMC2 FIR4, a clump of new stars embedded in a gaseous and dusty cloud near to the famous Orion Nebula.

“To our great surprise, we found that the proportion of two chemical species, one based on carbon and oxygen and the other on nitrogen, is much smaller in this object than in any other protostar we know,” says Dr Cecilia Ceccarelli, of the Institute de Planétologie et d’Astrophysique de Grenoble, France, who lead the study with Dr Carsten Dominik of the University of Amsterdam in the Netherlands.

In an extremely cold environment, the measured proportion could arise by one of the two compounds freezing onto dust grains and becoming undetectable. However, at the relatively ‘high’ temperature of about –200°C found in star-forming regions like OMC2 FIR4, this should not occur.

“The most likely cause in this environment is a violent wind of very energetic particles, released by at least one of the embryonic stars taking shape in this proto-stellar cocoon,” Dr Ceccarelli adds.

The most abundant molecule in star-forming clouds, hydrogen, can be broken apart by cosmic rays, energetic particles that permeate the entire Galaxy. The hydrogen ions then combine with other elements that are present – albeit only in trace amounts – in these clouds: carbon and oxygen, or nitrogen.

Normally, the nitrogen compound is also quickly destroyed, yielding more hydrogen for the carbon and oxygen compound. As a result, the latter is far more abundant in all known stellar nurseries.

Strangely enough, though, this was not the case for OMC2 FIR4, suggesting that an additional wind of energetic particles is destroying both chemical species, keeping their abundances more similar.

Astronomers think that a similarly violent wind of particles also gusted through the early Solar System, and this discovery might finally point to an explanation for the origin of a particular chemical element seen in meteorites.

Meteorites are the remains of interplanetary debris that survived the trip through our planet’s atmosphere. These cosmic messengers are one of the few tools we have to directly probe the elements in our Solar System.

“Some elements detected in meteorites reveal that, long ago, these rocks contained a form of beryllium: this is quite puzzling, as we can’t quite understand how it got there,” explains Dr Dominik.

The formation of this isotope – beryllium-10 – in the Universe is an intricate puzzle of its own. Astronomers know that it is not produced in the interior of stars, like some other elements, nor in the supernova explosion that happens at the end of a massive star’s life.

The majority of beryllium-10 was formed in collisions of very energetic particles with heavier elements like oxygen. But since this isotope decays very quickly into other elements, it must have been produced just before it was incorporated in the rocks that would later appear on Earth as meteorites.

In order to trigger these reactions and produce an amount of beryllium matching that recorded in meteorites, our own Sun must have blown a violent wind in its youth.

These new observations of OMC2 FIR4 give a very strong hint that it is possible for a young star to do this.

“Observing star-forming regions with Herschel not only provides us with a view on what happens beyond our cosmic neighbourhood, but it’s also a crucial way to piece together the past of our own Sun and Solar System,” says Göran Pilbratt, ESA’s Herschel project scientist.

“Herschel finds evidence for stellar wind particles in a protostellar envelope: is this what happened to the young Sun?” by C. Ceccarelli et al. is published in The Astrophysical Journal Letters, July 2014.

The study is based on observations performed with the Heterodyne Instrument for the Far-Infrared (HIFI) on Herschel, as part of the Herschel Guaranteed Time Key Programme Chemical HErschel Surveys of Star forming regions (CHESS). 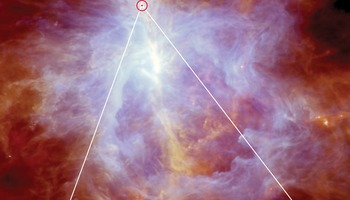 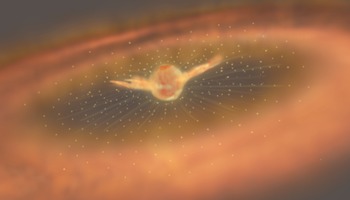