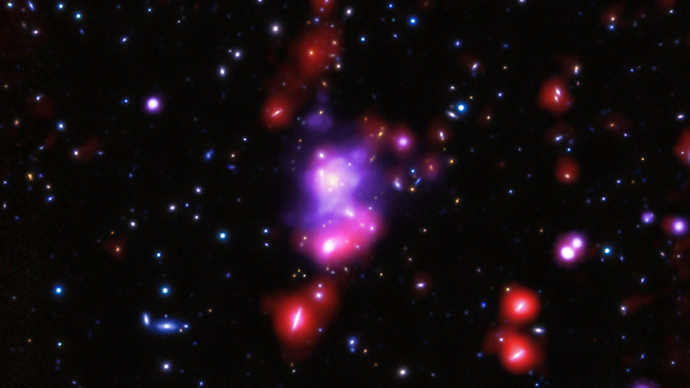 Astronomers using ESA’s Herschel space observatory have found, for the first time, fireworks of star birth within galaxies at the dense core of a massive early Universe galaxy cluster. This frenzy of star formation reveals the young lives of now “red and dead” elliptical galaxies and gives new clues to the evolution of some of the largest structures in the Universe.

Among the biggest questions faced by today’s astronomers are how and where galaxies form their stars and how this has changed over cosmic time. The answers are likely to lie in the Universe’s galaxy clusters, gravitationally bound groups of hundreds, or even thousands, of galaxies which provide a valuable laboratory to explore the birth of stars and how galaxies evolve.

The galaxy clusters we observe in the local Universe exist more or less in the present; 13.8 billion years after the Big Bang. Observing clusters in this late epoch of the Universe’s history means we are seeing them after a long period of evolution, and it shows.

The red and dead elliptical galaxies concentrated in the densely packed and aging cores of these local clusters are devoid of bright blue stars, making them appear “red” and, for the most part, they also lack the gas reservoirs needed to create new stars. This makes these galaxies, for all intents and purposes, “dead”, and means that star formation in the present day is limited to the cluster outskirts, or in the regions outside these giant clusters, taking place only in low density environments.

Yet, the presence of large numbers of now aging stars in these elliptical galaxies tells us that there must once have been a frenzy of star formation in these crowded cores, at a time when star birth favoured high density environments. To uncover clues to how the relation between star formation and the density of the region in which it takes place has evolved over time, astronomers have sought to observe star formation in the densely packed central regions of massive galaxy clusters in the cosmic past.

Now, for the first time, astronomers using Herschel have observed a state of furious star formation within the central regions of the massive cluster XDCPJ0044.0-2033, which lies well beyond our local Universe. At a redshift of almost 1.6, we are seeing this cluster as it was 9.6 billion years ago, 4.1 billion years after the Big Bang.

“Until now we have generally found that the cores of massive clusters are depleted of star formation, akin to galaxy graveyards,” explains Joana Santos, an INAF researcher at Osservatorio Astrofisico di Arcetri, Italy, and lead author of a study published today in MNRAS Letters. “But now, by hunting for more distant clusters we can look back in time across the cosmic ages to search for the epoch when galaxies in clusters were giving birth to stars.”

The cluster’s mass was calculated using data from NASA’s Chandra X-ray observatory to be about four hundred thousand billion times that of our Sun making this the most massive cluster known at such a great distance and providing valuable insight into the behaviour of massive clusters in the early years of the Universe.

Using Herschel the team searched XDCPJ0044.0-2033 for the far-infrared radiation that would reveal interstellar dust was being heated by young, hot, stars. They found clear signs of vigorous star formation within the cluster’s galaxies.

“Because the clues to quantifying star formation lie in a cluster’s infrared signature Herschel is the perfect telescope for the job,” says Göran Pilbratt, ESA’s Herschel project scientist. “Herschel has allowed astronomers to map the star formation in these clusters by measuring the far-infrared emission from the particles of dust that are mixed in with the gas associated with star birth.”

“Herschel’s view into the far-infrared Universe allowed us to map the energy distribution within the cluster’s galaxies and we found not only that there are definitely stars forming in the inner region but also how many stars are being formed,” Santos says.

By mapping the infrared radiation from the galaxies the team was able to work out how hot the gas and dust within the galaxies was and what amount of star birth would be needed to heat it to this level. By doing this for galaxies in the inner region of the cluster, an area measuring over one and half million light years across, the team found that the cluster has a star formation rate of almost two thousand solar masses per year, four times the rate found in its outer regions.

The detection of such an unprecedented level of star formation in the cluster makes the discovery a first for clusters of this mass and tells us that we are witnessing a very early stage in galaxy cluster evolution. These, potentially fleeting, fireworks will form huge numbers of stars before, at some stage, the process halts and the cluster’s core becomes like those we see in our local Universe — filled with aging elliptical galaxies.

The true significance of this prolificacy of star formation is evident when compared to other clusters of a similar mass. The cluster XMMU J2235.3-2557, for example, has a very similar mass and lies only a little more than half a billion years later in cosmic history at 4.8 billion years after the Big Bang and yet shows no signs of star formation in its inner regions. Nor does a significant amount of star formation take place in the inner regions of any massive cluster found between us and XDCPJ0044.0-2033. Finding star birth in the core of XDCPJ0044.0-2033 is an important step towards establishing at what period in cosmic history the star formation preference changed from the high density environments in cluster cores, as with XDCPJ0044.0-2033 just 4.1 billion years after the Big Bang, to the low density settings outside clusters, like the star formation we see in our local Universe. To better determine the epoch in which this change occurred astronomers will need to find and study other massive clusters at these large look-back times and search for signs of star birth in their cores.

“There is still much to learn about the lifecycle of these episodes of vigorous star formation and
what this can tell us about the evolution of the Universe. To gain a more detailed picture we need to keep searching for massive clusters and distant fireworks with the best astronomical facilities,” remarks Santos.

“The reversal of the SF-density relation in a massive, X-ray selected galaxy cluster at z=1.58: results from Herschel” by J. S. Santos et al. appears in Monthly Notices of the Royal Astronomical Society: Letters, published by Oxford University Press, November 2014.

The study is based on observations performed with Herschel instruments PACS and SPIRE and the object was identified using archive XMM-Newton data as part of the XMM-Newton Distant Cluster Project  (Principal Investigator: H. Boehringer (MPE)).

The calculation of the mass of the cluster was part of a related study led by Paolo Tozzi, an INAF researcher at Osservatorio Astrofisico di Arcetri, Italy, using data from NASA’s Chandra X-ray observatory. The results of that study are published in The Astrophysical Journal.

The PACS instrument contains an imaging photometer (camera) and an imaging spectrometer. The camera operates in three bands centred on 70, 100, and 160 ?m, respectively, and the spectrometer covers the wavelength range between 51 and 220 ?m. PACS has been developed by a consortium of institutes led by MPE (Germany) and including UVIE (Austria); KU Leuven, CSL, IMEC (Belgium); CEA, LAM (France); MPIA (Germany); INAF-IFSI/OAA/OAP/OAT, LENS, SISSA (Italy); IAC (Spain). This development has been supported by the funding agencies BMVIT (Austria), ESA-PRODEX (Belgium), CEA/CNES (France), DLR (Germany), ASI/INAF (Italy), and CICYT/MCYT (Spain). 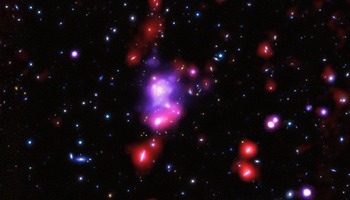 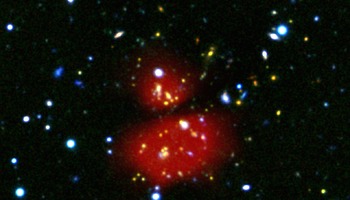