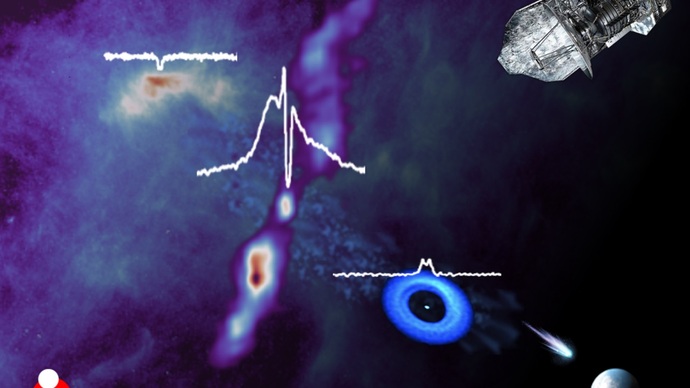 Image: From top left to bottom right: water in a cold interstellar cloud, near a young, forming star with an outflow, in a protoplanetary disc, in a comet and in the oceans of an exoplanet. The first three stages show the spectrum of water vapour measured by the HIFI instrument on the Herschel space observatory. The signals from the cold interstellar cloud and from the protoplanetary disk have been exaggerated in this image by a factor of 100 compared to those from the young, forming star in the centre. (c) ESA/ALMA/NASA/L.E. Kristensen

Dutch astronomer Ewine van Dishoeck (Leiden University, the Netherlands), together with an international team of colleagues, has written an overview of everything we know about water in interstellar clouds thanks to the Herschel space observatory. The article, published in the journal Astronomy & Astrophysics, summarizes existing knowledge and provides new information about the origin of water on new, potentially habitable, worlds. The article is expected to serve as a reference work for the next twenty years.

How and where water is formed in interstellar space and how it eventually ends up on a planet like Earth was not well understood ten years ago. One reason for this is that observations made with ground-based telescopes are affected by water vapour in our own atmosphere. In 2009, ESA launched the far-infrared space telescope Herschel. One of Herschel’s main goals was to research water in space. Herschel was in service until 2013. Of particular importance was the HIFI instrument built under Dutch leadership, also known as the 'molecule hunter'. In recent years, dozens of scientific articles have been published based on Herschel's water data. Now these results have been combined and expanded with new insights.

The new study describes the journey of water throughout the star formation process, including the intermediate stages which , until now, had received less attention. The paper shows that most of the water is formed as ice on tiny dust particles in cold and tenuous interstellar clouds. When a cloud collapses into new stars and planets, this water is largely preserved and quickly anchored into pebble-sized dust particles.. In the rotating disc around the young star, these pebbles then form the building blocks for new planets.

Furthermore, the researchers have calculated that most new solar systems are born with enough water to fill several thousand oceans. Ewine van Dishoeck: "It's fascinating to realise that when you drink a glass of water, most of those molecules were made more than 4.5 billion years ago in the cloud from which our sun and the planets formed."

Many of the earlier Herschel results focused on the hot water vapour that is prominently seen and copiously produced near forming stars. But that hot water is lost to space by the powerful outflows from the young star. Whilst writing the review, the researchers gained more and more insight into the chemistry of the cold water vapour and ice. For example, they were able to show that interstellar ice grows on dust particles layer by layer. They based this conclusion on the weak signals from heavy water (HDO and D2O instead of H2O).

In the future, researchers hope to be able to study more water in the universe, particularly in forming planetary systems. However, that might take a while. The next space telescope comparable to Herschel is planned to launch no earlier than 2040. Ewine van Dishoeck: "There was a chance that a 'water telescope' would go into space around 2030, but that project was cancelled. That is a pity, but it was an extra reason for our team to write the water overview. In that way we have a collective memory for when a new mission comes along."

Moreover, at the end of 2021, the James Webb space telescope will be launched. It will contain the MIRI instrument, built by a European-US partnership, which will be able to reveal a part of the water roadmap that has remained out of reach until now. MIRI will be able to detect warm water vapour in the innermost zones of dust disks. Co-author Michiel Hogerheijde (Leiden University and the University of Amsterdam): "Herschel has already shown that planet-forming disks are rich in water ice. With MIRI we can now follow that trail into the regions where Earth-like planets are formed."

Looking beyond Webb, NASA and the science community have conceptualized a proposed telescope – the  Origins Space Telescope. Origins would be a six-meter telescope cooled to near 4K to deliver superb advances in far-infrared capabilities, and would potentially include European and Japanese contributions.

“The Origins spectral range is replete with diagnostics of atoms, molecules, ions and dust, including more than a hundred transitions of water vapor to trace water’s progression through various environments to an Earth-like planet,” said George Helou, Director, Caltech / IPAC.

The ALMA telescopes in Chile can observe water vapor in space from the ground. This includes water in distant galaxies where the water lines have shifted away from those in the Earth's atmosphere. Co-author Lars Kristensen (University of Copenhagen, Denmark) adds: "Thanks to Herschel's legacy, we can interpret these ALMA data much better."

About the Herschel space telescope

Herschel was a space telescope of the European Space Agency (ESA) built in cooperation with the NASA. Its HIFI and PACS instruments were used for the water research. HIFI was designed and built by a consortium of institutes and university departments across Europe, Canada, and the United States under the leadership of SRON Netherlands Institute for Space Research, the Netherlands, with major contributions from Germany, France, and the USA. The PACS instrument was developed by a consortium of institutes and universities across Europe led by the Max Planck Institute for Extraterrestrial Physics in Germany. Ewine van Dishoeck led the water research in the WISH programme (Water in Star-forming regions with Herschel).

NASA's Herschel Project Office was based at the agency’s Jet Propulsion Laboratory (JPL) in Southern California. JPL contributed mission-enabling technology for two of Herschel's three science instruments, including the highest-frequency mixers on HIFI and the bolometer arrays on SPIRE. The NASA Herschel Science Center (NHSC), part of IPAC at the Caltech in Pasadena, supported the United States astronomical community. Caltech manages JPL for NASA. For more information about Herschel and the NHSC, see: https://herschel.caltech.edu.

Water in star-forming regions: Physics and chemistry from clouds to disks as probed by Herschel spectroscopy. By Ewine F. van Dishoeck et al. Accepted for publication in Astronomy & Astrophysics, 2021.