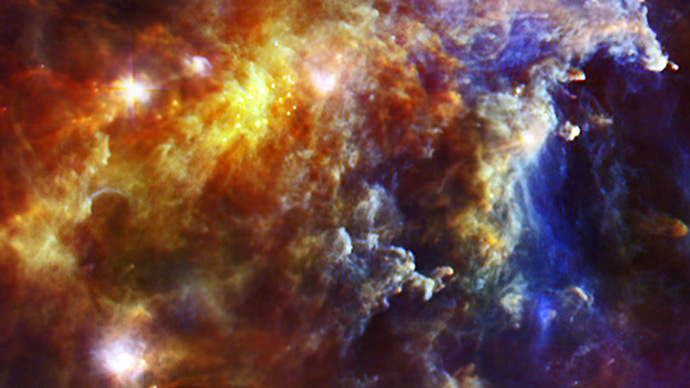 The Herschel Space Observatory has uncovered a cosmic garden of budding stars, each expected to grow to 10 times the mass of our sun.

The new image can be seen online at the Herschel Website. It was taken using infrared light by Herschel, a European Space Agency mission with important NASA participation.

"Herschel can see through cold thickets of dust to where big, baby stars are forming," said Paul Goldsmith, the NASA project scientist for the mission at NASA's Jet Propulsion Laboratory, Pasadena, Calif.

The image shows most of the cloud associated with the Rosette nebula, located about 5,000 light-years from Earth in the constellation Monoceros, the Unicorn. The region contains a family of growing stars, with the oldest and most massive members in the center of the nebula, and younger and less massive generations located farther out in the associated cloud. The nebula's cluster of the most massive stars, located beyond the right edge of the picture, is responsible for hollowing out the cavity. There's enough dust and gas in the entire Rosette cloud to make about 10,000 suns.

The large, embryonic stars uncovered by Herschel are thought to be a younger generation. They are located inside the tips of pillars that appear to branch out from thicker cloud material. The pillars were, in fact, excavated by the nebula's massive star cluster. Winds and radiation from those stars pushed less dense material away from the pillars, and probably triggered the birth of the big stars inside the finger-like structures. In fact, the pillars point to the location of the massive nebula stars.

The intermediate-mass stellar embryos, each a couple of times as massive as the sun, are located in the redder regions of the image. The small spots near the center of the image are lower-mass embryonic stars, similar in mass to the sun.

Astronomers study regions like the Rosette not only to learn how stars form in our Milky Way, but also to get a better idea of what's going on in distant galaxies. When astronomers look at faraway galaxies, they are seeing light from regions that are bursting with massive stars. In order to compare our galaxy to distant ones, it is therefore important to understand high-mass star formation.

The principal investigator of this research is Frédérique Motte of the French National Center of Scientific Research and Atomic and Alternative Energies Center, Paris-Saclay, France (see http://hobys-herschel.cea.fr ). Motte was a postdoctoral fellow at the California Institute of Technology in Pasadena.

Herschel is a European Space Agency cornerstone mission, with science instruments provided by a consortia of European institutes and with important participation by NASA. NASA's Herschel Project Office is based at JPL. JPL contributed mission-enabling technology for two of Herschel's three science instruments. The NASA Herschel Science Center, part of the Infrared Processing and Analysis Center at Caltech in Pasadena, supports the U.S. astronomical community. Caltech manages JPL for NASA. 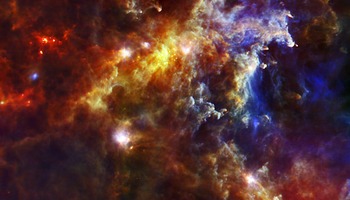 Big Babies in the Rosette Nebula