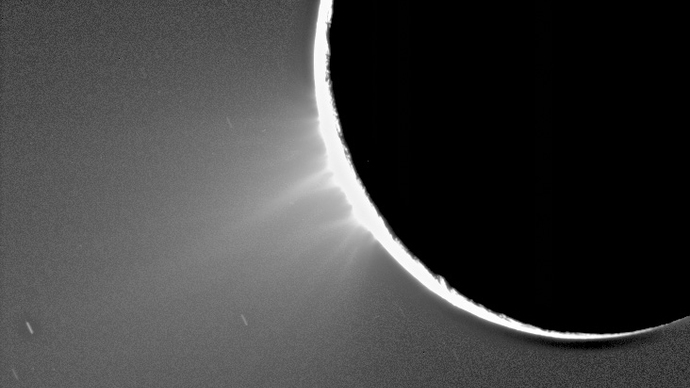 Chalk up one more feat for Saturn's intriguing moon Enceladus. The small, dynamic moon spews out dramatic plumes of water vapor and ice -- first seen by NASA's Cassini spacecraft in 2005. It possesses simple organic particles and may house liquid water beneath its surface. Its geyser-like jets create a gigantic halo of ice, dust and gas around Enceladus that helps feed Saturn's E ring. Now, thanks again to those icy jets, Enceladus is the only moon in our solar system known to influence substantially the chemical composition of its parent planet.

In June, the European Space Agency announced that its Herschel Space Observatory, which has important NASA contributions, had found a huge donut-shaped cloud, or torus, of water vapor created by Enceladus encircling Saturn. The torus is more than 373,000 miles (600,000 kilometers) across and about 37,000 miles (60,000 kilometers) thick. It appears to be the source of water in Saturn's upper atmosphere.

Though it is enormous, the cloud had not been seen before because water vapor is transparent at most visible wavelengths of light. But Herschel could see the cloud with its infrared detectors. "Herschel is providing dramatic new information about everything from planets in our own solar system to galaxies billions of light-years away," said Paul Goldsmith, the NASA Herschel project scientist at NASA's Jet Propulsion Laboratory, Pasadena, Calif.

The discovery of the torus around Saturn did not come as a complete surprise. NASA's Voyager and Hubble missions had given scientists hints of the existence of water-bearing clouds around Saturn. Then in 1997, the European Space Agency's Infrared Space Observatory confirmed the presence of water in Saturn's upper atmosphere. NASA's Submillimeter Wave Astronomy Satellite also observed water emission from Saturn at far-infrared wavelengths in 1999.

While a small amount of gaseous water is locked in the warm, lower layers of Saturn's atmosphere, it can't rise to the colder, higher levels. To get to the upper atmosphere, water molecules must be entering Saturn's atmosphere from somewhere in space. But from where and how? Those were mysteries until now.

Build the model and the data will come.

The answer came by combining Herschel's observations of the giant cloud of water vapor created by Enceladus' plumes with computer models that researchers had already been developing to describe the behavior of water molecules in clouds around Saturn.

One of these researchers is Tim Cassidy, a recent post-doctoral researcher at JPL who is now at the University of Colorado's Laboratory for Atmospheric and Space Physics, Boulder. "What's amazing is that the model," said Cassidy, "which is one iteration in a long line of cloud models, was built without knowledge of the observation. Those of us in this small modeling community were using data from Cassini, Voyager and the Hubble telescope, along with established physics. We weren't expecting such detailed 'images' of the torus, and the match between model and data was a wonderful surprise."

The results show that, though most of the water in the torus is lost to space, some of the water molecules fall and freeze on Saturn's rings, while a small amount -- about 3 to 5 percent -- gets through the rings to Saturn's atmosphere. This is just enough to account for the water that has been observed there.

Herschel's measurements combined with the cloud models also provided new information about the rate at which water vapor is erupting out of the dark fractures, known as "tiger stripes," on Enceladus' southern polar region. Previous measurements by the Ultraviolet Imaging Spectrograph (UVIS) instrument aboard the Cassini spacecraft showed that every second the moon is ejecting about 440 pounds (200 kilograms) of water vapor.

"With the Herschel measurements of the torus from 2009 and 2010 and our cloud model, we were able to calculate a source rate for water vapor coming from Enceladus," said Cassidy. "It agrees very closely with the UVIS finding, which used a completely different method."

"We can see the water leaving Enceladus and we can detect the end product -- atomic oxygen -- in the Saturn system," said Cassini UVIS science team member Candy Hansen, of the Planetary Science Institute, Tucson, Ariz. "It's very nice with Herschel to track where it goes in the meantime."

While a small fraction of the water molecules inside the torus end up in Saturn's atmosphere, most are broken down into separate atoms of hydrogen and oxygen.

"When water hangs out in the torus, it is subject to the processes that dissociate water molecules," said Hansen, "first to hydrogen and hydroxide, and then the hydroxide dissociates into hydrogen and atomic oxygen." This oxygen is dispersed through the Saturn system. "Cassini discovered atomic oxygen on its approach to Saturn, before it went into orbit insertion. At the time, no one knew where it was coming from. Now we do."

"The profound effect this little moon Enceladus has on Saturn and its environment is astonishing," said Hansen.

The Cassini-Huygens mission is a cooperative project of NASA, the European Space Agency and the Italian Space Agency. JPL, a division of the California Institute of Technology in Pasadena, manages the mission for NASA's Science Mission Directorate in Washington. The Cassini orbiter and several of its instruments were designed, developed and assembled at JPL.

Herschel is a European Space Agency cornerstone mission, with science instruments provided by consortia of European institutes and with important participation by NASA. NASA's Herschel Project Office is based at JPL. JPL contributed mission-enabling technology for two of Herschel's three science instruments. The NASA Herschel Science Center, part of the Infrared Processing and Analysis Center at Caltech, supports the United States astronomical community. 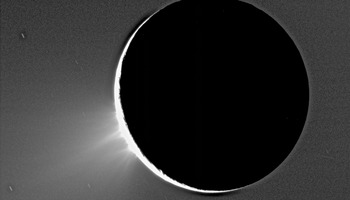