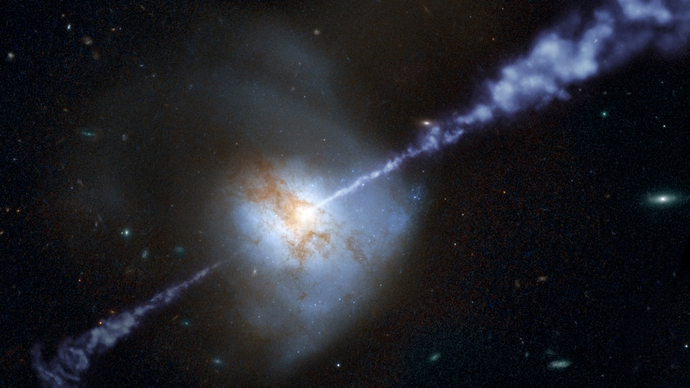 "We want to know how star formation and black hole activity are linked," said Mathew Page of University College London's Mullard Space Science Laboratory in the United Kingdom and lead author of a paper describing these findings in this week's journal Nature. "The two processes increase together up to a point, but the most energetic black holes appear to turn off star formation."

Supermassive black holes, weighing as much as millions of suns, are believed to reside in the hearts of all large galaxies. When gas falls upon these monsters, the material is accelerated and heated around the black hole, releasing great torrents of energy. Earlier in the history of the universe, these giant, luminous black holes, called active galactic nuclei, were often much brighter and more energetic. Star formation was also livelier back then.

Studies of nearby galaxies suggest active black holes can squash star formation. The revved-up, central black holes likely heat up and disperse the galactic reservoirs of cold gas needed to create new stars. These studies have only provided "snapshots" in time, however, leaving the overall relationship of active galactic nuclei and star formation unclear, especially over the cosmic history of galaxy formation.

"To understand how active galactic nuclei affect star formation over the history of the universe, we investigated a time when star formation was most vigorous, between eight and 12 billion years ago," said co-author James Bock, a senior research scientist at NASA's Jet Propulsion Laboratory in Pasadena, Calif., and co-coordinator of the Herschel Multi-tiered Extragalactic Survey. "At that epoch, galaxies were forming stars 10 times more rapidly than they are today on average. Many of these galaxies are incredibly luminous, more than 1,000 times brighter than our Milky Way."

For the new study, Page and colleagues used Herschel data that probed 65 galaxies at wavelengths equivalent to the thickness of several sheets of office paper, a region of the light spectrum known as far-infrared. These wavelengths reveal the rate of star formation, because most of the energy released by developing stars heats surrounding dust, which then re-radiates starlight out in far-infrared wavelengths.

The researchers compared their infrared readings with X-rays streaming from the active central black holes in the survey's galaxies, measured by NASA's Chandra X-ray Observatory. At lower intensities, the black holes' brightness and star formation increased in sync. However, star formation dropped off in galaxies with the most energetic central black holes. Astronomers think inflows of gas fuel new stars and supermassive black holes. Feed a black hole too much, however, and it starts spewing radiation into the galaxy that prevents raw material from coalescing into new stars.

"Now that we see the relationship between active supermassive black holes and star formation, we want to know more about how this process works," said Bill Danchi, Herschel program scientist at NASA Headquarters in Washington. "Does star formation get disrupted from the beginning with the formation of the brightest galaxies of this type, or do all active black holes eventually shut off star formation, and energetic ones do this more quickly than less active ones?" 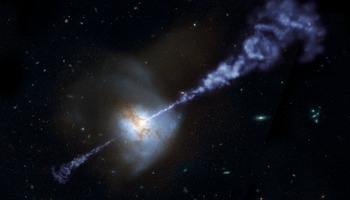