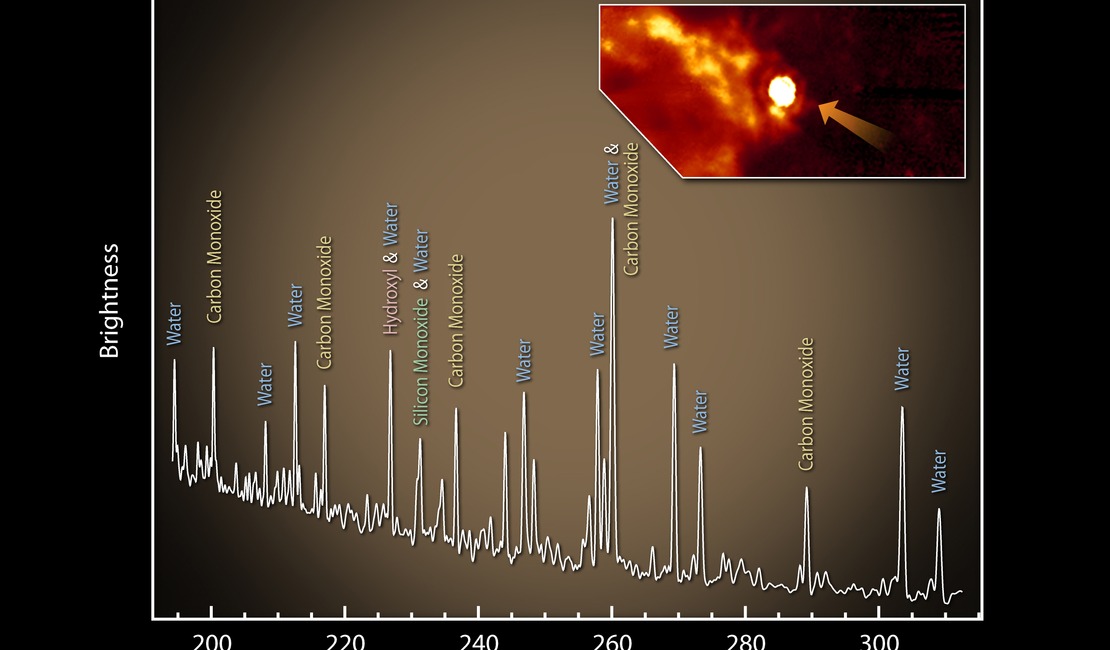 This is one of the early spectra obtained with the SPIRE fourier transform spectrometer on Herschel. Shown here is a portion of the SPIRE spectrum of VY Canis Majoris (VY CMa), a red supergiant star near the end of its life, which is ejecting huge quantities of gas and dust into interstellar space. The inset is a SPIRE camera map of VY CMa, in which it appears as a bright compact source near the edge of a large extended cloud.

The VY CMa spectrum is amazingly rich, with prominent features from carbon monoxide (CO) and water (H2O). More than 200 other spectral features have been identified so far in the full spectrum, and several unidentified features are being investigated. Many of the features are due to water, showing that the star is surrounded by large quantities of hot steam. Observations like these will help to establish a detailed picture of the mass loss from stars and the complex chemistry occurring in their extended envelopes. As in all of the SPIRE spectra, the underlying emission increases towards shorter wavelengths, and is due to the emission from dust grains. The shape of the dust spectrum provides information on the properties of the dust.

VY Canis Majoris (VY CMa) is a red supergiant star located about 4900 light years from Earth in the constellation Canis Major. It is the largest known star, with a size of 2600 solar radii, and also one of the most luminous, with a luminosity in excess of 100 000 times that of the Sun. The mass of VY CMa lies in the range 30-40 solar masses, and it has a mass-loss rate of 2x10-4 solar masses per year.

The shell of gas it has ejected displays a complex structure; the circumstellar envelope is among the most remarkable chemical laboratories known in the Universe, creating a rich set of organic and inorganic molecules and dust species. Through stellar winds, these inorganic and organic compounds are injected into the interstellar medium, from which new stars orbited by new planets may form. Most of the carbon supporting life on Earth was forged by this kind of evolved star. VY CMa truly is a spectacular object, it is close to the end of its life and could explode as a supernova at any time.

This SPIRE FTS observation was carried out as part of the performance verification of the observatory. The scientific rights of this observation are owned by the MESS Key Programme consortium led by M. Groenewegen.