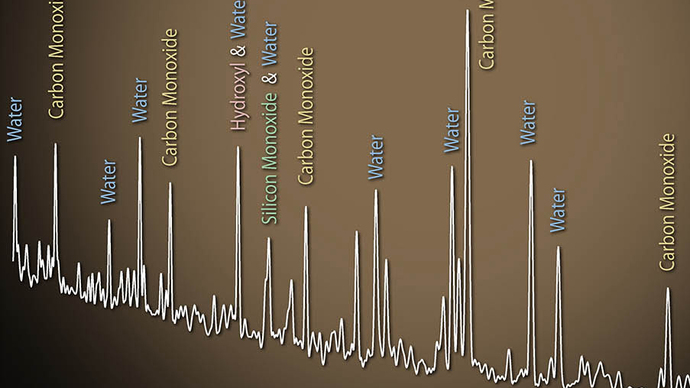 Herschel spectroscopy takes center stage today as new spectra, obtained with the SPIRE, PACS and HIFI instruments during the performance verification phase, are released by ESA and the instrument teams. Taken together with earlier images the observatory is now on the way to demonstrating that the promised imaging and spectroscopic capabilities are being met.

Since its launch in May this year the teams working on the Herschel Space Observatory have made steady progress as they prepare to hand over the observatory to the world's astronomical community.

Early reports on the mission focussed on stunning images from the two cameras onboard.

Today, the three Herschel spectrometers take center stage, as new spectra are released. In contrast to images that reveal the distribution of light across the field of view, spectra provide an astronomical fingerprint of the objects being studied. Detailed analyses of these spectra provide insight into the physical and chemical composition of the objects.

The newly issued Herschel spectra, obtained with the SPIRE Fourier Transform Spectrometer, the PACS integral field spectrometer, and the HIFI heterodyne instrument touch on a number of key science goals for the mission and are an early demonstration of the capabilities of the observatory.

A broad spectrum of objects has been observed, including comets, massive stars, star-forming regions, and a variety of galaxies.

Fabulously detailed spectra reveal forests of emission lines and signatures of elements, some detected for the first time. For full details click on the images to the left.

The Road to Routine Operations

Since launch on 14 May this year, the Herschel Space Observatory has been subject to a rigorous series of tests and preparatory activities leading to a fully operational observatory. Early emphasis was placed on performing observations with the SPIRE and PACS imaging photometers as this also provided the opportunity to test the optics and pointing characteristics of the telescope. With the confirmation provided by these observations of the excellent quality of the Herschel telescope, the way was cleared to include all three spectrometers in the regular operations planning.

The SPIRE and PACS instruments are now nearing the end of the science demonstration phase and will soon be entering routine operations phase.

During the performance verification phase the HIFI instrument suffered a setback which required it to be put into temporary hibernation while the nature of the problem was investigated and a solution found. A plan of action leading to HIFI full operations in January has been provisionally agreed. (For further information see the Herschel Operations Blog.)