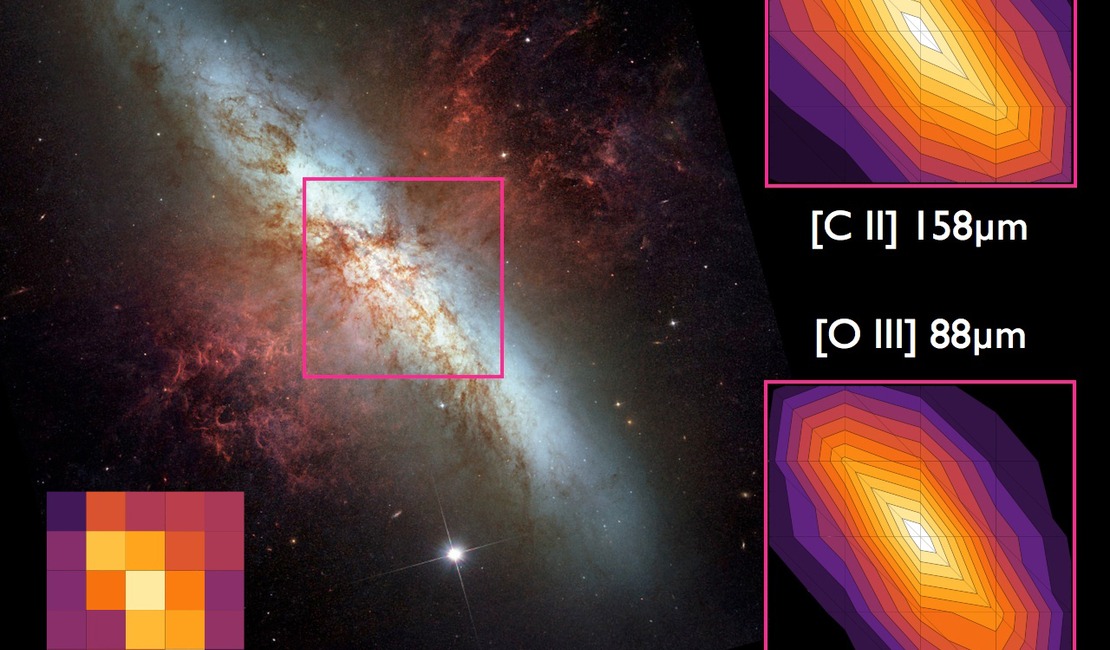 This is one of the early spectra obtained with the PACS integral field spectrometer on Herschel. Shown here are spectral images from a region (indicated by the pink box overlaid on the optical image) of the prototype nearby starburst galaxy, M82.

The figure shows spectral images from two important tracers of the ISM: the two insets on the right show intensity maps of the line emission from doubly ionized oxygen ([O III]) and from singly ionized carbon ([C II]). The inset on the lower left shows the ratio [O III]/[C II] of these two lines. This ratio, a diagnostic of ionized gas versus neutral gas and a reflection of the different physical conditions across the galaxy, drops rapidly going outwards from the galaxy centre along the disk. In contrast to this the ratio drops less when going outward in the super-wind direction.

Messier 82 (M82), is a prototype starburst galaxy about 12 million light years away in the constellation of Ursa Major. This galaxy is famous for its spectacular bi-polar outflow or "super-wind", gas and dust driven outwards by stellar winds and supernovae in the galaxies central regions, where stars are produced at a very high rate. M82 is part of an interacting group of galaxies including the large spiral M81 from which material is being stripped by the gravitational interaction with M82.

The physical conditions in the interstellar material (ISM) of such a galaxy vary strongly across the different environments. PACS has the sensitivity and spatial resolution to study these variations in unprecedented detail.